I don't know nor can I say what other people do on a warm, sunny Saturday afternoon in late July, but I can share with you what I love doing.

After all the morning lessons have been taught, all the yard work taken care of and lunch over, its time to hang out with friends under the trees in the deep shade and talk of this and that. Yesterday, that talk led to my telling about an email I had received from Paula McCollum. 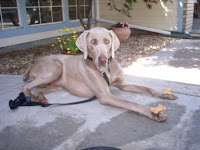 Mind you, it wasn't very long before the camera was out and we set off on one of those fun "can you top this one?" adventures. While I started figuring out just where we would do our "photo shoot", Sidney ran inside to gather up some of the necessary props, Alison put all the extraneous dogs up in the kennels and Damien cleared away the lunch clutter.

The instant the humans all got busy the three Dobes stopped whatever they had been doing and showed up in the outside office. Each and every one of them was hoping this new activity would include them. So it did.

Still in the "can you top this" frame of mind we started off with Sanity handling 4 bones. One on each foreleg and two carefully balanced on her nose. Piece of cake, says she. 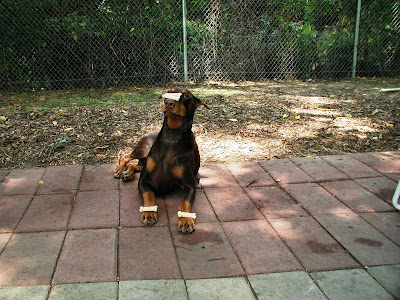 So this leads to making it just a tad bit more difficult. How about a bone on each foreleg, a bone in one's mouth AND a bone carefully balanced on the nose? 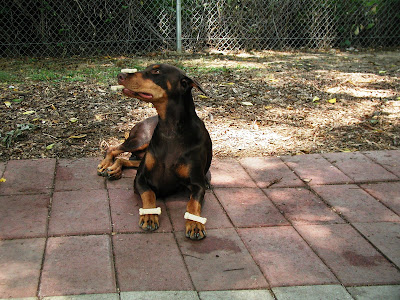 Not to be outdone, Chance is quick to show that he can do that 2 bone trick as well. 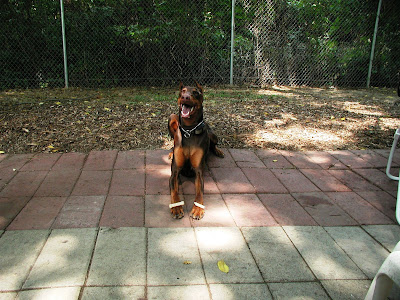 Meanwhile, Sanity figures that he is going to take a while getting things straight so she goes off for food and drink for one and all. 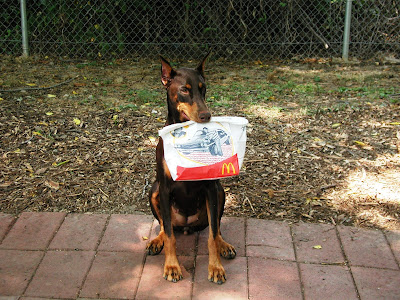 Yes, it was a MickyD's day. Some days a body's just gotta have a big, sloppy fast food burger. Chance lines up for his part, while Sanity gets busy on a Coke. 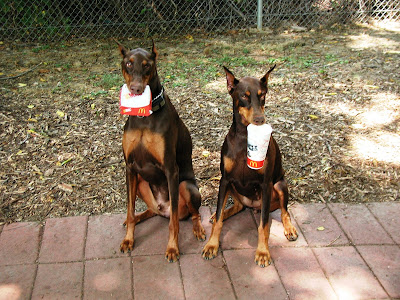 Meanwhile, Wrap has been patiently hanging around the edges, just hoping and I suspect remembering when she was the star performer in all the little summer plays. So we finally get to a point where we can call on her for a small walk-on part. It makes her day and she is then happy to go off and snooze in a cool, shady spot. 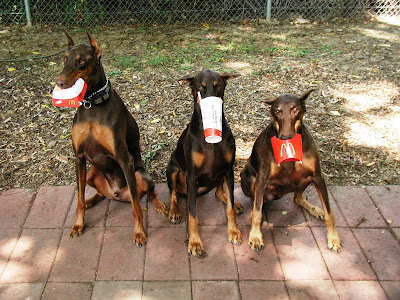 Now, for all the bleeding hearts out there, yes the dogs did get to eat all the bones when we were finished. There were even enough for the dogs that had to sit in the kennel runs and watch. Plus everyone of them got a french fry. Mind you, I didn't say they each got their own BOX of fries, but they did get a single fry. Seems that is just a part of the after shoot clean-up.

Months and months of serious training work and we get to spend a lazy summer's afternoon playing. I always am left with the feeling that the dogs enjoy these silly "plays" as much as the humans. One of the nice things about working with dogs that have such a solid foundation is that they actually hang around watching very closely and are quick to step up and try anything we ask of them. This was Chance's first time at being one of my actors. He hung around the edges watching everything Sanity was doing and then when he was called, well let's just say he's a natural and I'm sure he will show up as the leading man in other productions.

From Wrap, Sanity and myself...hope you love summer at least half as much as we do.
Posted by Margot Woods at Sunday, July 29, 2007 3 comments:

Sanity and I got to go the the Jewelry Show today. In retrospect I realized this was actually the first time Sanity had been asked to handle such a large, noisy, crowded venue. She was really quite good.

She stayed as close to my scooter as was needed, was very sensible and laid down to rest each time I turned it off. I think that was a signal to her that we would be in one spot for a while. She wormed her way through the crowds likes a seal slides through the water. Managed to work the right side of the scooter almost as comfortably as the left side. Best of all, she carefully listened to my directions and/or instructions and then did what I ask of her.

Here are a few pictures of the day.

One of the things that always gets me is the number of people who seem to feel it is just fine to touch, pet, stroke, talk to, offer food to any dog they come across that is working. What on earth are they thinking? More than likely they aren't thinking at all. The uninvited hand in the last picture is a good example. My friend Linda was standing there with the camera taking pictures while I tried the silly, but fun chokers on Sanity.

This guy was with a woman who was having some sort of fit about not just Sanity, but dirty dogs in general. He just all of a sudden jams his hand in Sanity's face. You have no idea just how fast my hand was there to block contact. What the camera caught was his hand approaching and my hand already moving into the block position. He then proceed to tell me I sure had a nice Greyhound. DUH! Gee, thanks mister.

She was also called a Whippet. Then there was the woman who complimented me on my lovely chocolate Lab. She said her sister's daughter's husband's cousin had a chocolate Lab that looked just like her and how kind the dog was. Someone else told another woman "he is a Greyhound". And then there was the couple who stopped me and wanted to talk about my beautiful Afghan Hound.

When faced with this sort of thing I have pretty much given up and just smile, nod and thank people for the compliments and do my very best to pretend I don't hear or see the others. The friend I was with said it was very interesting to listen to what people were saying since they had no idea she was with me.
She also said it was sort of scary to realize just how few people had any idea what a well mannered dog even looked like. As for the breed business I did get complimented on my self-control. 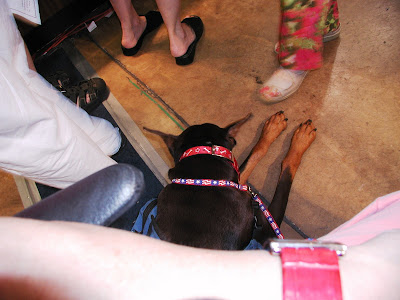 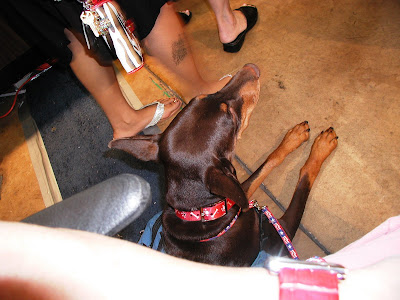 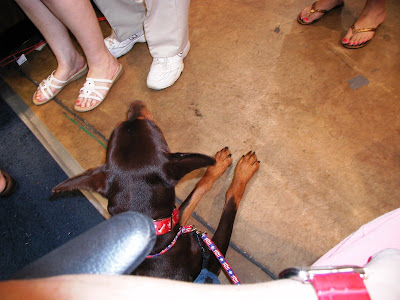 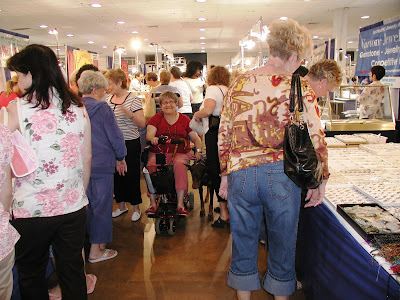 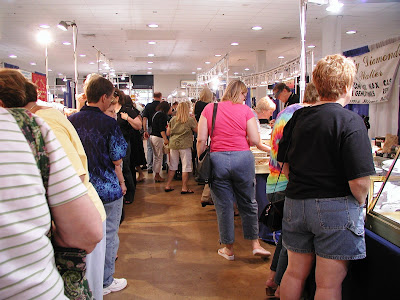 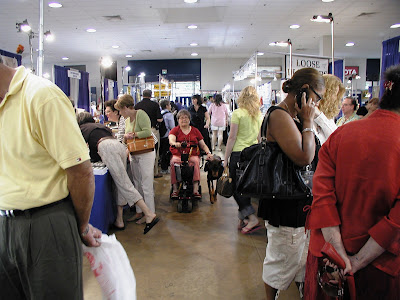 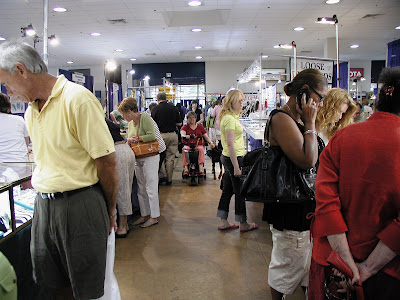 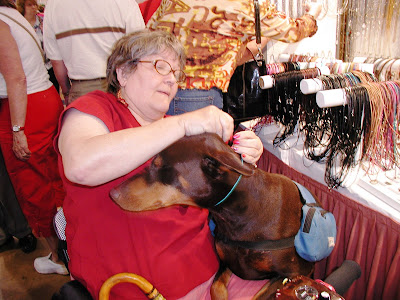 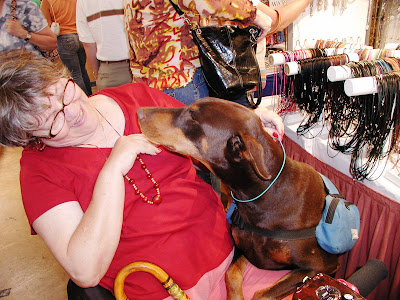 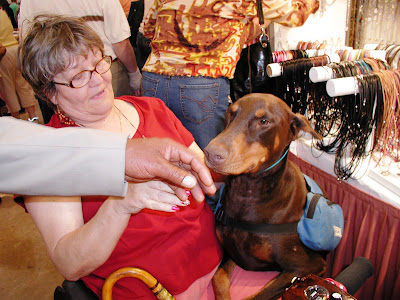