The new TriTronics ecollars arrived yesterday and Sanity gets to be one of the first to try them out. The receiver is noticeably smaller than the older models and lighter, just puppy size. And so it starts.

First on goes the ecollar and starting at 1/2 I started watching for a reaction. Nothing. So I moved the dial to 1. Was that a twitch I saw? ^Tap^ the button again. Nope. Nothing. I really don't want to move to 2 so 1 constant and just a ^Tap^ on the button should do. Yeap! That did it. Good girl and now I can go back to the 1 momentary. ^Tap^ "Sanity, ^T^ "Come". Patting my leg I slowly reel in the longe line. "What a good puppy. Good girl." She stops. I ^T^"Come". Good girl, that's what I want, keep on coming. ^T^ ^T^ and she has reached my legs. Gently stroking her shoulders and back and the side of her head I tell her over and over again how clever she is and then with an "OK" I release her and walk away.
Posted by Margot Woods at Friday, July 29, 2005 No comments: 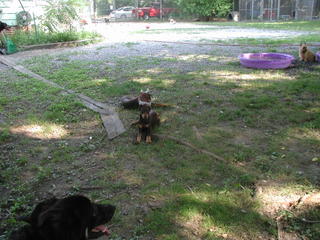 Today was even hotter than yesterday. Sanity's sister came to spend the day in day care and by early afternoon they had reached the end of their energy. Inspite of the heat we trained most of the day and both pups were very attentive to the goings on. They both show, by their behavior, that they understand they are not to bother the dog that is working. This tells me that tomorrow is the day to start more serious training with Sanity.
Posted by Margot Woods at Wednesday, July 27, 2005 No comments: 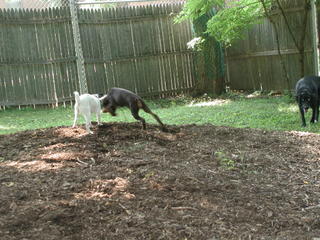 This was just a normal day other than it was HOT. Sanity is beginning to recognize her name and has agreed that it will be just fine. I on the other hand, am having second thoughts about it. It is too close to Charity in sound and she reminds me of Charity so much that I find myself slipping. Will need a couple more days to decide if the name is going to stick.

Hole digging is one of the only sensible activities on a day as hot as this one. 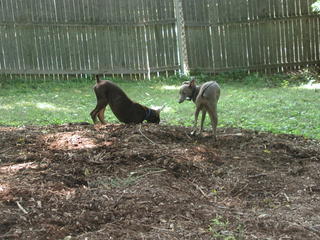 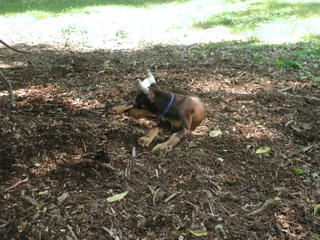 The cool dirt is a good resting place.

This morning Sanity was definitely showing more interest in me than in the other dogs or the yard. I do believe she has decided I will be acceptable as an owner. Cathie and I are both relieved by her choice. After all, she could had announced she really didn't like it here or didn't like the working conditions or the job description and then she would have been flying back to Chicago.

The really interesting thing that happened today was watching her meet a new puppy. This pup is only a month older, but the difference in size is enormous and when she first saw him 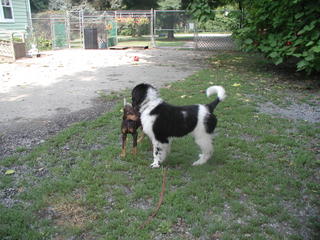 I though her eyes were going to pop right out of her head they got so big. Once again, her good breeding really came shining through as she stood her ground, was more sensible then many adult dogs in a similar situation. See for yourself. Yes, Leo really is only 4.5 months old. He is going to be one really big Newfie when he finally finishes growing. 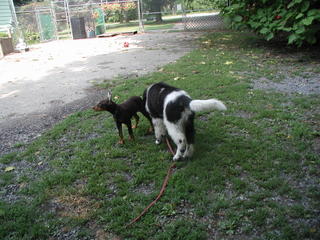 Today she was quite willing to take an afternoon nap and then join the group class in the evening. No she didn't work in the class, just hung out on the sidelines and watched. Once the class was over, she headed for bed and totally crashed for the night.
Posted by Margot Woods at Monday, July 25, 2005 No comments:

Instead of a quiet, lazy day we hosted a MAD Gather to welcome Sanity to her new home and career and to welcome Cathie to Maryland. The number of people and dogs swelled and Sanity had a chance to let me glimpse what sort of a yard boss she may become with time and training. 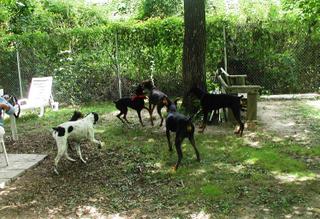 If you look closely you can just see the top of her head on the other side of the Pointer. She is definitely holding her own during this exchange and still managing to be a polite puppy. 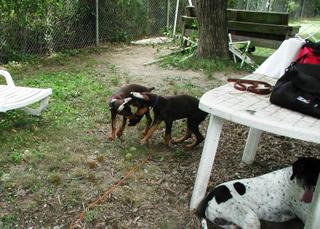 of a stolen sock. 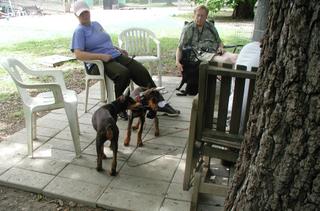 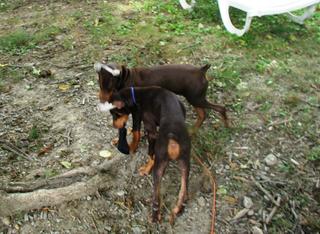 This sock became a highly prized item for some time and for those of you who wonder what professional dog trainers do on their day off. The answer is easy as Linda shows in this picture. 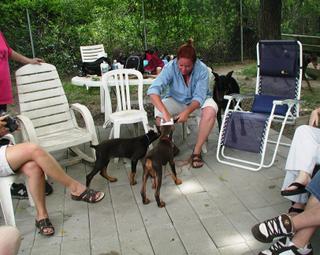 We seem compelled to train puppies. By the end of the Gather Sanity was actually starting to run out of steam. Not being one to give up any advantage she chose to take a quick nap and protect her conquest at the same time. 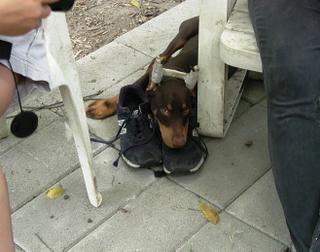 Finally, by day's end the batteries were beginning to run down and need recharging. 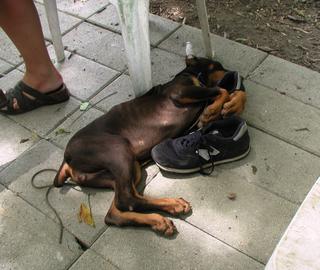 In fact, by this point she was so tired she didn't even wake up when everyone took their leave. As we were finishing the clean-up, she finally woke up and sort of staggered off to the house to go bed. A solid 3 hour nap was needed to recharge those batteries enough to allow time to eat and play a little before bedtime. Want a good puppy? Have a tired puppy.
Posted by Margot Woods at Sunday, July 24, 2005 No comments: 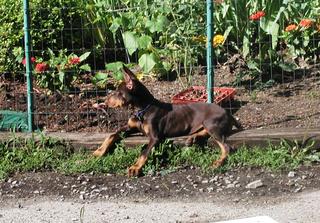 Saturdays around here in the summertime are really busy and this one was no exception. Sanity followed along behind the older dogs and didn't seem to be all that interested in playing with those her age. She was not the least bit bothered by having to be kenneled during lessons that were too advanced for her tender age and very willing to hang out and watch when the lesson was something to watch. Somewhere durng the afternoon she actually started paying attention to me and following around behind me, watching pretty near everything I did. Cathy, her breeder, and I both consider this to be a very good sign.
Posted by Margot Woods at Saturday, July 23, 2005 No comments:

She arrived July 22 at about 10:30 in the morning. This 12-week old ball of energy hit the pavement running. Flying into BWI from Chicago, by the time she reached her new home she had already been on the go for more than 6 hours. Plunked down to do the meet and greet thing, she gamely stood her ground while being checked over by no less than 12 adult dogs and several pups. Within less than 5 minutes the greeting phase was over and she was off an running with the two pups closest to her age.

For the rest of the day she stayed pretty much in constant motion, checking out all parts of the almost one acre yard, following first one dog and then another on one doggie mission after another. She didn't do more than pause briefly when the first loud train rumbled past, an ambulance from the rescue squad on the corner only got a glance and the backfire of a truck on the highway wasn't even worth a glance. What she was doing in that yard might be called "play" by some, but I saw a very serious pup going about the business of learning just what the lay of the land was and just what the laws of this new land would be. Some things got her yelled at by an older dog, some things seemed to get put on the "check out later" list.

As the day wore on she did begin to slow down a tad bit and by the time the daycare dogs were taking their leave, she had actually decided to notice that there were people in the yard and said people were watching her most intentely. So from yard to other dogs to people her interests traveled.

So secure in herself she never missed a meal, knew to asked to go out to potty, learned from the other dogs where the best drinking water was and where the best digging spot was and by bedtime was so tired she was pretty much stumbling over her own very large feet. What is she?

She is a very well-bred Doberman puppy and her official name is Casarhy's Where is my Sanity. This blog is hopefully to be all about her first year of training.
Posted by Margot Woods at Saturday, July 23, 2005 No comments: 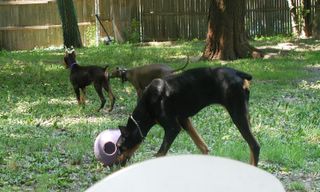 Sanity checks out the yard while Ceasar(Italian Greyhound day care dog) checks her out. Little does he know that in just a few short weeks she will tower over him.
Day 1, 11 a.m.